Operation, how it works

A quick word about plug wiring. Never dress spark plug wires from high energy ignitions in a bundle. Electric field and magnetic field coupling can cause enough cross-talk to spark an unwanted plug even with good wires. Never dress two adjacent distributor post wires  next to each other for any distance. For example, in a 1-3-7-2-6-5-4-8 Ford firing order, never dress wires 1 and 3 or wires 6 and 5 next to each other for any distance. The reason for this is simple. If adjacent post wires ever cross-talk, you can fire a cylinder 90 degrees ahead of time. Cross-firing adjacent posts can be a worse case scenario, firing a cylinder while the cylinder is full of unburned fuel and air (and soon to be on the way up). Adjacent firing cylinders are 90 degrees out of phase  mechanically. With 20 degrees running spark advance, a cross fire can ignite a the next cylinder with 110 degrees spark advance! That much advance is never good at high speeds.

Resistance is generally a very poor way to test wires. Most meters measure resistance with voltages well below 9 volts. The spark is thousands of times higher voltage! An open wire or high resistance at 9 volts can behave perfectly at 20kV, and a low-ohm wire test can behave poorly. Although high resistance conductors should be avoided, resistance measurements with typical low voltage meters actually have very little to do with high voltage wire performance. A simple meter test will neither guarantee a wire is bad or good! A visual inspection for cracks, holes, or burns is actually much more reliable than a meter. Unless you have a proper tester or know how to test visually, if you have any doubts about wire condition, change them.

I'll show you why, even though some claim things like that, it cannot be correct for any distributor system that has the ignition spark timing pickup or trigger located inside the distributor. While this is specifically about the common Ford TFI system, system basics also apply to most other systems.

My experience with ignitions started early. In the early 1960's, I hand built a tachometer and solid state ignition for my dad's 1957 Ford. While still driven by the points, and still using the stock coil, four early transistors reduced the point current. I just wanted to see how power transistors would work in ignitions, since they were starting to appear in some car radios.

The TFI is a module that replaces the electrical function of breaker points. The TFI module is nothing but a solid state off-and-on switch controlled by a small signal.

In early Ford computer systems (before crank trigger systems), a shutter wheel interrupts the flux path of a small permanent magnet to a Hall effect cell. The path interruption by the steel blade of a shutter wheel changes the Hall cell's conduction state.

The computer looks at this voltage, which is called the PIP (profiled ignition pickup) signal. This signal replaces the mechanical cam on a breaker points distributor. The computer rapidly and continually learns the sequence of the pulses, smoothing them while also learning number one pulse postion, and then modifies the timing of evenly-spaced, but much longer, pulses sent to the TFI module.

The TFI replaces the metal contacts on "points", which are an electrical equivalent of the old mechanical cam operated normally closed switch contacts in breaker points.  The TFI is closed, just like breaker points, when the computer supplies an ignition dwell signal. The steady dwell current, just as with old points systems, builds a magnetic field in the ignition coil core.

The dwell signal disappears at the moment the computer wants spark. This removes coil magnetic charging and field holding current. The collapsing magnetic field causes an extremely high secondary voltage. We could accurately say this is a magnetic discharge system, as opposed to a capacitor discharge system.

Most of the current limiting is in the ignition coil. A bad coil or the wrong coil is extremely rough on the the TFI module.

When steady direct current voltages are applied to inductors, current will build. Eventually current reaches a maximum value that is limited by static and dynamic resistances. Heat is always current squared times resistance, so heat is produced by current through the resistance. Every bit of operating heat produced inside the TFI module, and in the ignition coil, is caused by resistances and average current through those resistances. 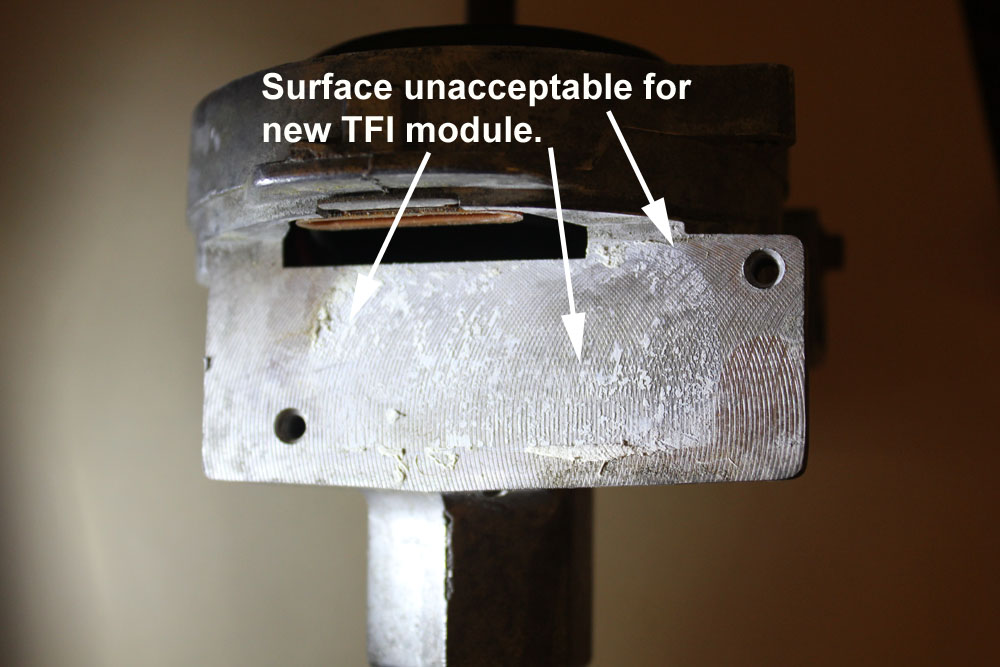 The above surface is unacceptable. The lumpy, dirty, surface will prevent the module from having good contact. This will cause the module to run hotter.

Cleaning the surface with a light solvent, such as 100% alcohol, lacquer thinner, mineral spirits, or almost any fast evaporating paint thinner, will remove the old, dry, lumpy, thermal compound. A clean surface, ready for a new TFI module, should look like this: 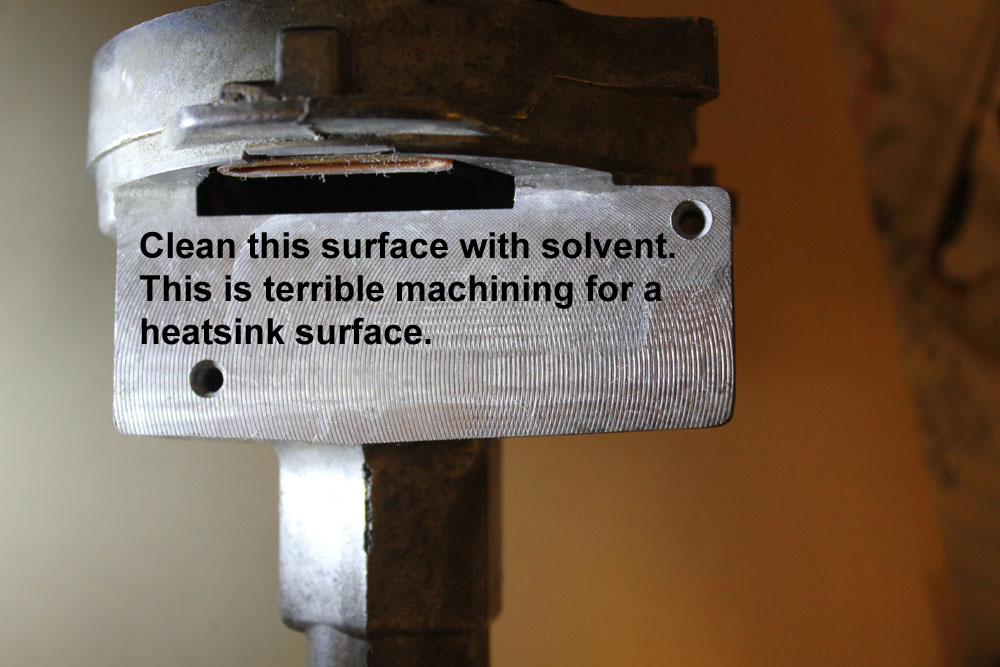 Ford, for some reason, does not machine the surface very well. Because air insulates heat, the surface requires a **thin** layer of heatsink compound or pure silicone dielectric compound between the clean TFI module surface and clean distributor surface. Contrary to Internet rumors, pure silicone dielectric compounds work almost as well as dedicated heat sink compounds. The grease functions to fill ridges, displacing any trapped air that would thermally insulate the module from the distributor. The grease has to be able to work down into the grooves and push air out. A thick layer of thick compound is actually as bad as no compound at all.

Do not use too much compound. Use just enough to fill the grooves fully. Nothing will transfer heat out of the module than direct metal to metal contact. Heat sink compound, although much better than air gaps, still has several times the thermal resistance of metal-to-metal contact.

The PIP system uses a Hall cell sensor. A shutter wheel interrupts the magnetic field from the magnet to the Hall cell. The block circuit is: 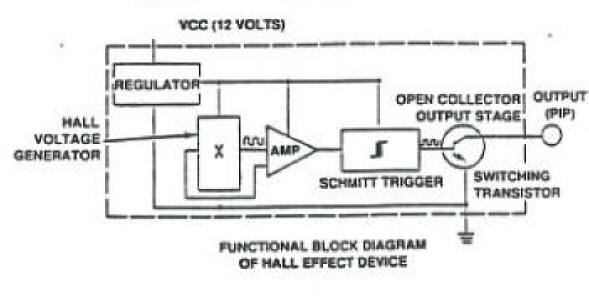 The functional description is:

The PIP triggers a timing reference signal as any wheel tooth enters the center area of the cell-to-magnet shutter wheel gap. 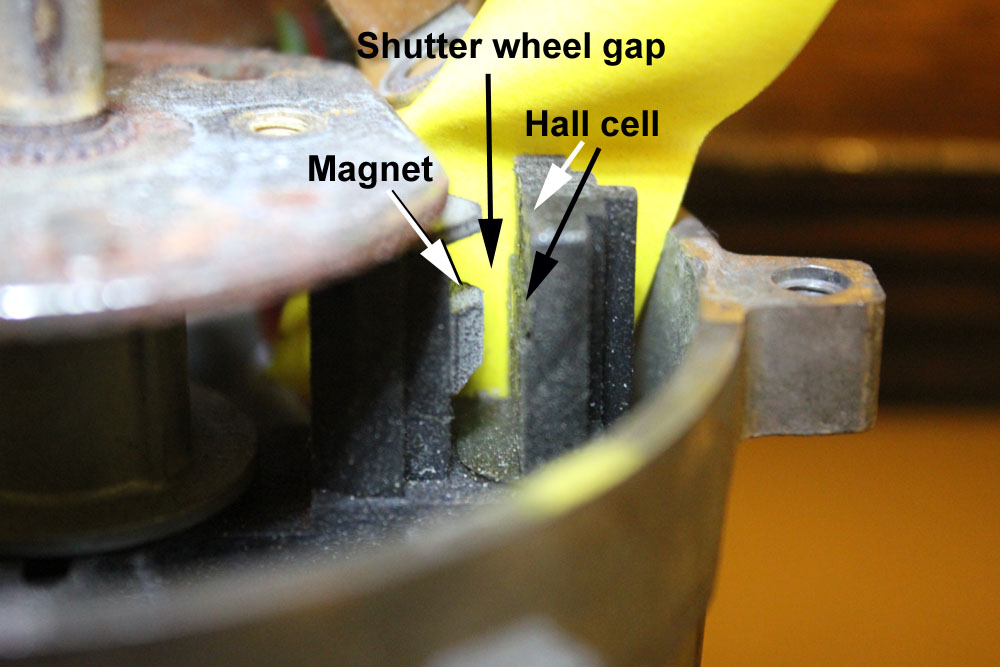 If the magnet loads up with iron trash, timing will become erratic. Enough trash can cause random PIP failure, shutting the computer down.

The wheel looks like this. The firing order is for the 302 HO camshaft: 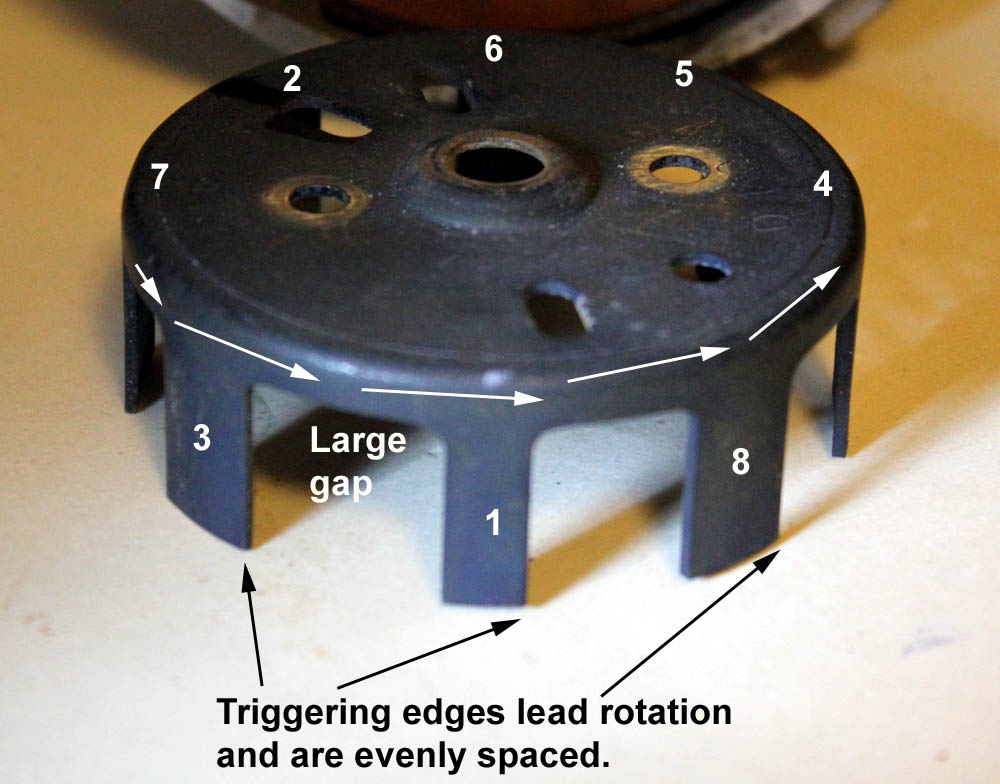 The actual wheel pattern looks like this. All teeth except 1 are the same size:

Notice the number 1 trigger tooth is narrower, causing a wide gap after the number eight trigger edge before the PIP's dwell. The computer watches for a longer open window to learn when number 1 is coming up. The computer knows how fast the wheel is spinning, and how far apart magnetic field blocking intervals occur. The EEC recognizes number one because of the longer gap after number one hits, which makes number one shorter off-time than the other PIP signals.

Since the ignition firing queue is at the leading edge passing through the Hall sensor gap, the leading tooth edge determines initial timing. Here is an oscilloscope view of the PIP signal. The display is set up so the plugs appear in sequence from left-to-right, air gap is at the top, and the vane is at the bottom: 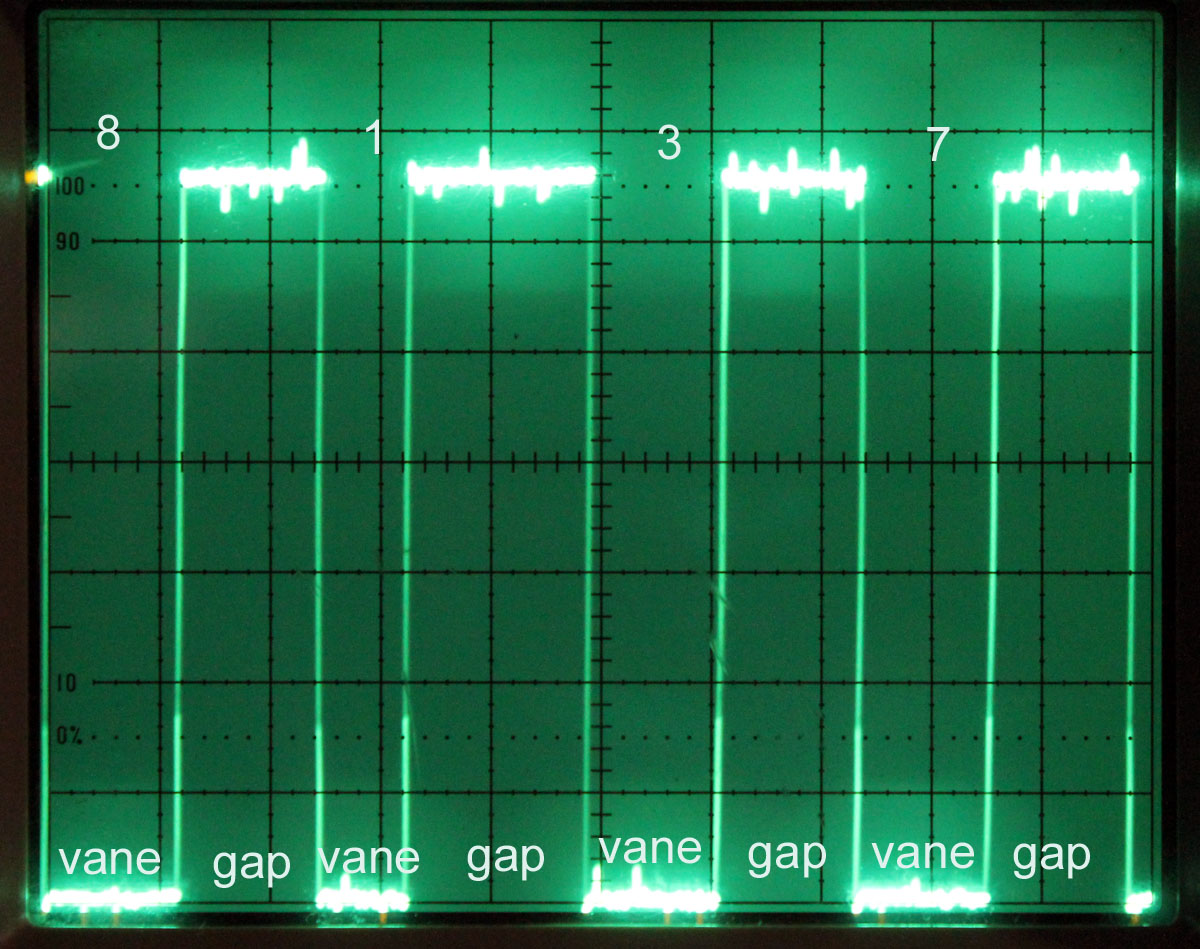 Low signal is the vane blocking the hall cell. High signals are gaps. Notice the long gap after 1.

The measured timing of the trace above is:

If you want to stab properly, put the engine about 10* BTDC, the distributor housing in a good position for adjustment rotation, and the leading edge of the shutter wheel number 1 tooth in the center of the hall cell gap. This will also point the trailing portion of the rotor contact blade at post number 1 inside the distributor cap.

The Hall cell gets power through, and returns PIP signal through, these three terminals: 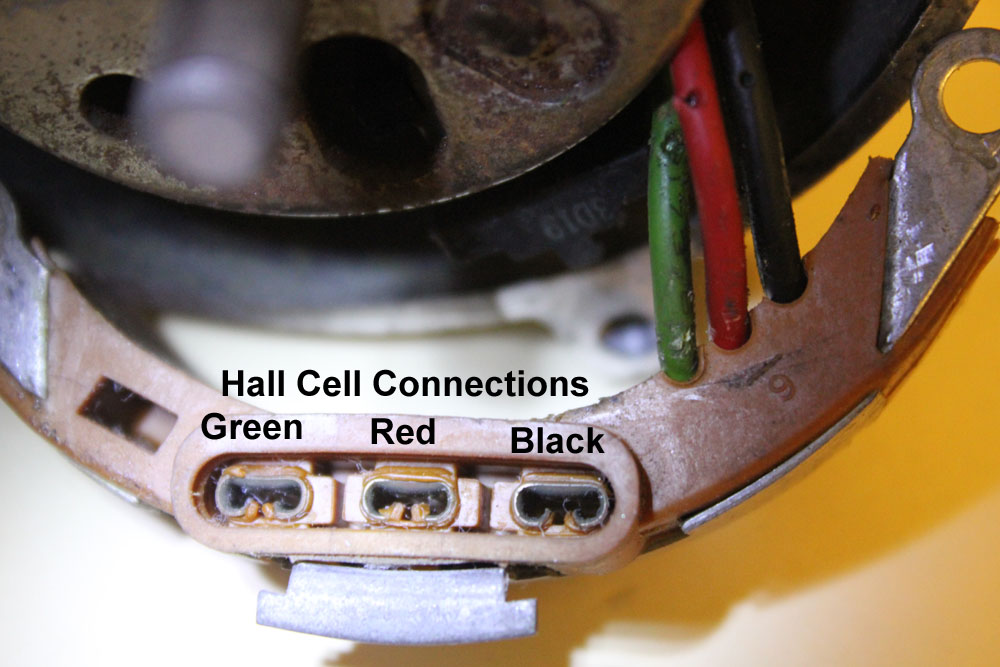 Make sure these female terminals are clean, and give them a light coating of dielectric grease.

Timing is set by the relationship of the distributor housing to the shutter wheel: 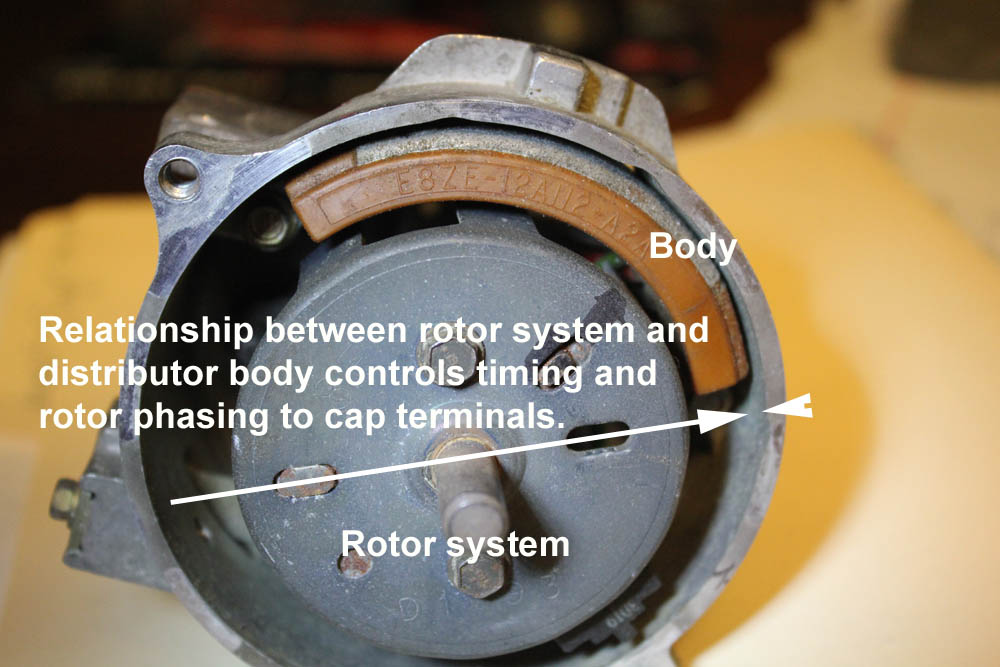 Contrary to rumors, the stab position is totally meaningless for distributor rotor to terminal synchronization or timing.

The stab position only changes the position where the housing produces the correct timing.

If you can rotate the distributor housing to the required position for proper timing without bumping into anything, and if the wires reach, you can slap the distributor in at any position on any tooth you like. In the case this Ford TFI system, all you would have to do is make sure the rotor's knife edge contact is near the exiting side of number one cap terminal when the crankshaft is set at the desired initial timing on the compression cycle for number one.

A PROPER installation for a 5.0 HO with EEC IV would be: 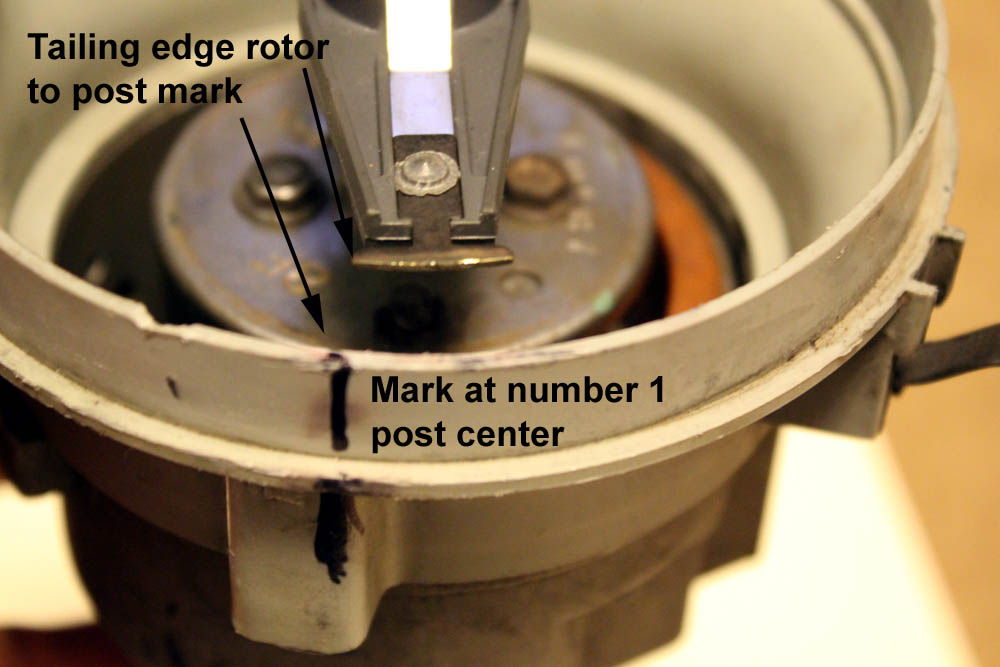 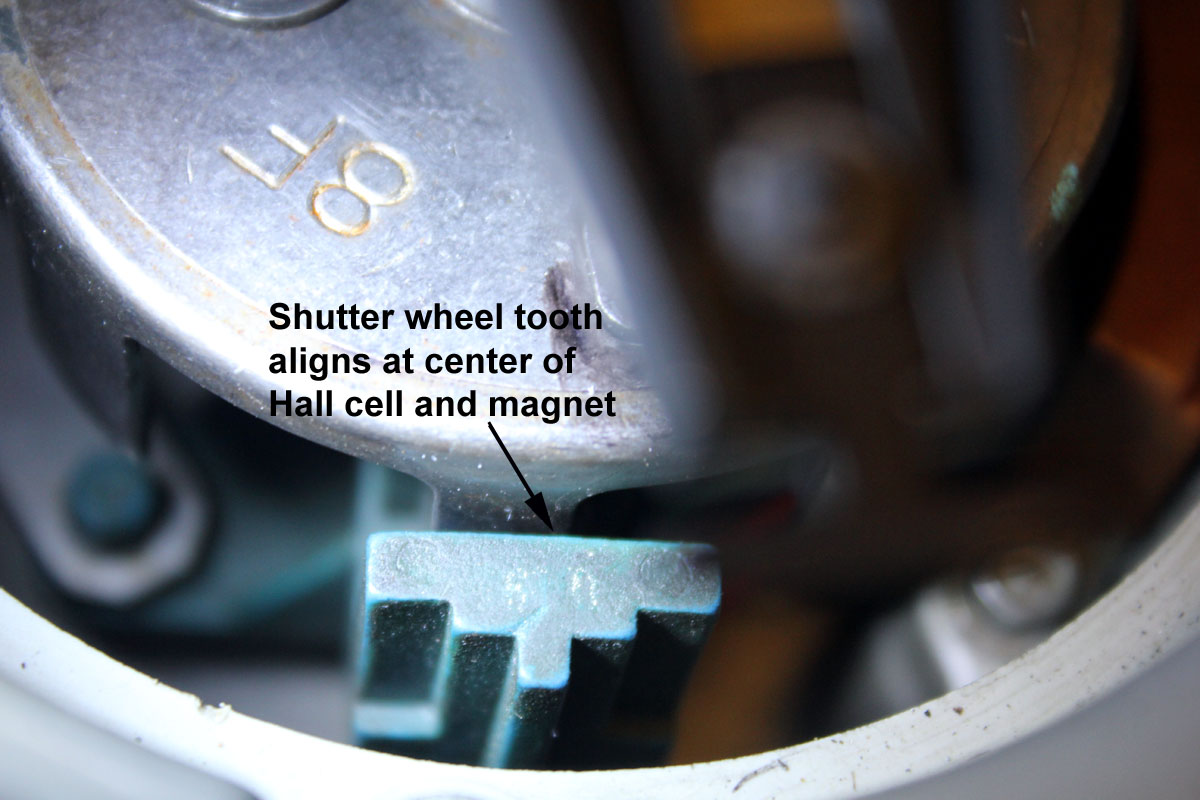 This is what you want with the distributor seated. 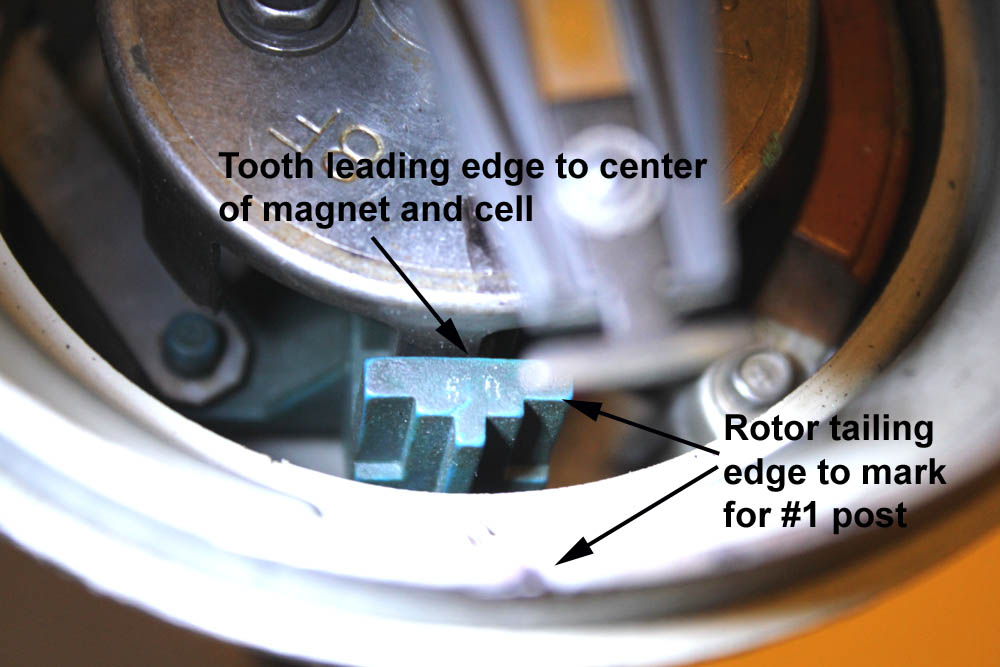 Anything done to the distributor externally, including the particular tooth stabbed, will not change rotor phasing, or the rotor tip position in relationship to the cap terminals when spark occurs. Rotor phasing, or the position of distributor rotor to cap terminal at spark, is controlled by shutter wheel-to-rotor relative position, the pickup position, and the position (clocking) of the cap on the distributor body. To change phasing, you have to relocate the rotor relative to mounting shaft and shutter wheel assembly, clock the hall cell with the vacuum advance lock (if the distributor allows this), or relocate the cap's clocking position on the distributor body. Moving (clocking) the cap is often easiest. Shortening the vacuum advance lock bar will make the spark fire with an earlier rotor position. You will have to retime the distributor if anything is altered.

When the housing is rotated in the block, the cap and pickup rotate together the same degrees. This changes the timing of cam to housing, which changes the timing. Rotating housing to block always changes timing, but does not change rotor to cap phasing.

Note: A crank trigger system mechanically separates the trigger point for the spark distribution. The spark timing is from a crankshaft reference, while the distribution is from the cam. Because spark trigger reference is mechanically independent of spark distribution, rotor phase will vary with either distributor rotation (rotor and cap relationship) or anything that affects timing (such as crank sensor position).

Be sure rotor phase is visually checked to center the rotor on the correct cap pin when mid range on timing. If the operating timing range is between ten degrees and 38 degrees, set the crank to 24 degrees BTDC on number 1 and center the rotor on terminal post 1 visually.  This will make the rotor have a maximum error of 14 degrees as timing varies between 10 degrees and 38 degrees. If you make an error or have uncertainty, try to make the error in favor of the maximum advance setting aligning.

The distributor has the following rules:

This is how distributors with pickups inside work. The rules above include optical, breaker points, and magnetic effect systems. 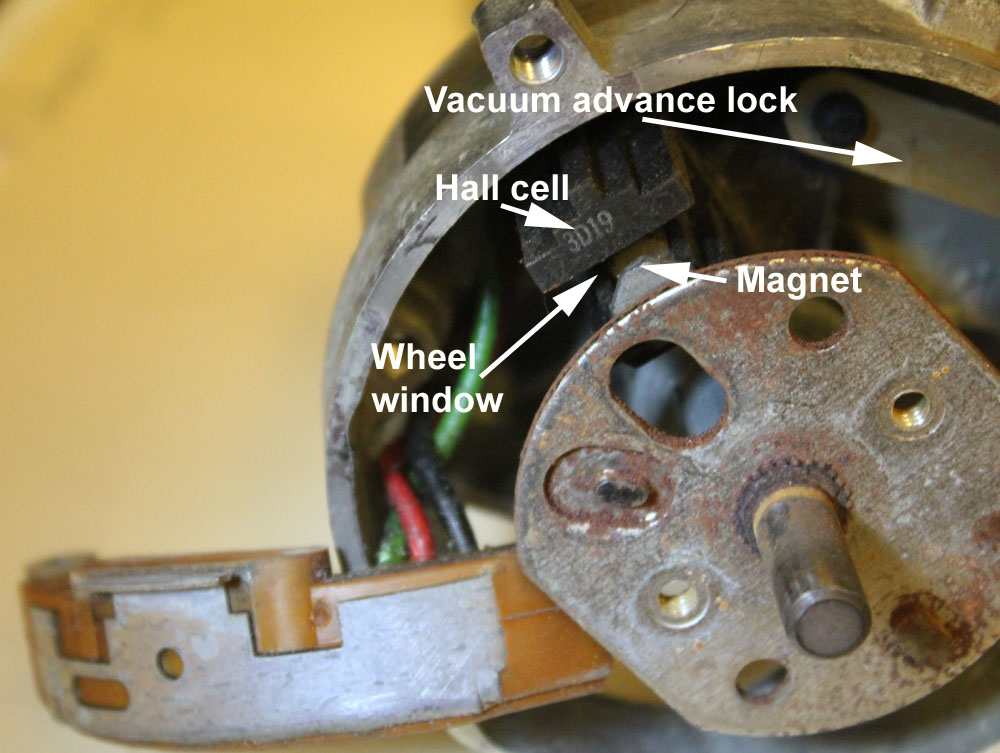