Assuming losses in the reference antenna or the antenna used as a standard are minimal, all antennas obtain gain through pattern change. As the applied power being converted to electromagnetic radiation is confined to or focused into a narrower spatial volume or area, the power density increases.

This is much like squeezing a sealed balloon. The fixed mass of air inside the balloon represents applied power, while the balloon's extension represents signal level or gain. For a given air mass, if we want to make it look like we have more mass, we have to squeeze the balloon so the air moves into the target area.

Antennas are the same way. The antenna cannot create more power or energy. It can "leak" and waste energy as heat, but it can only focus or concentrate the transmitter power it is given by not sending radiation in unwanted directions. Some antennas claim to increase gain through radiation resistance changes, or through some magical length. This is, to use a polite word, bologna!

Antenna patterns are created by interference between radiation sources. The effect of this interference is described through pattern multiplication, where multiple radiation source fields add or subtract. Ground effects can be described by splitting power and applying the split to a second (or even more) imaginary antenna. Radiation fields are vector multilied, considering both level and phase. This is pattern multiplication. It is important to remember the image antenna is not real, and the current is NOT actually at the location and depth being used. The current is really spread all around, and the image is just a tool to represent the overall surface current's effect. 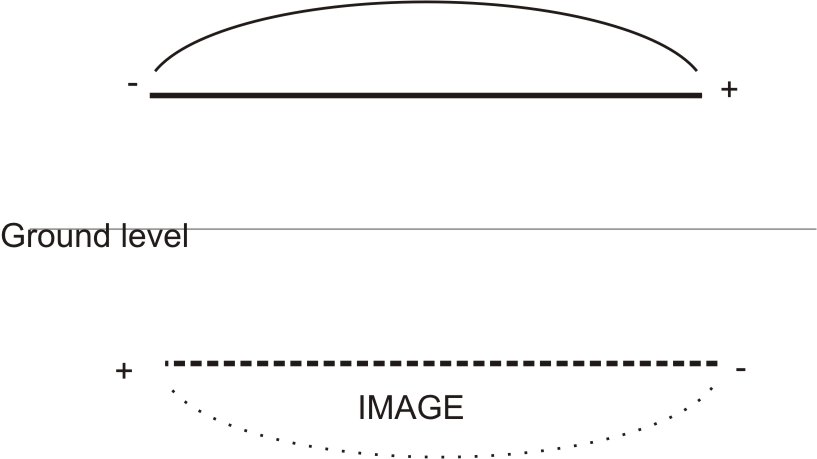 The "image" is a tool for understanding the earth's effect on patterns. Since the image is 180 degrees out-of-phase with the antenna and effectively the same distance below ground as the antenna is above ground, it becomes obvious there will be a null along the ground with a horizontally polarized antenna. The closer the antenna is to ground, the closer the source and image become, and more pronounced the null along the ground. 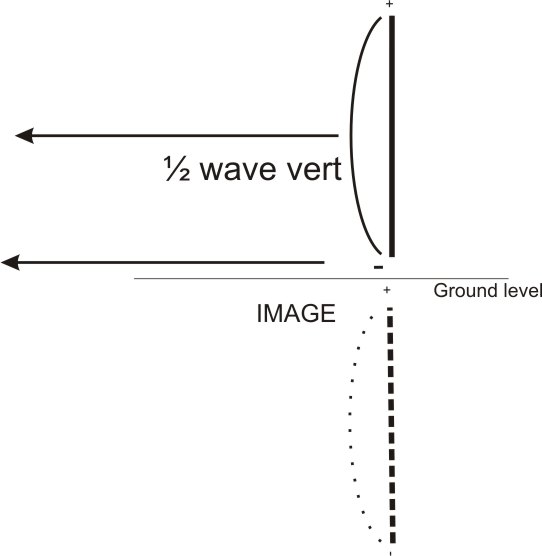 The 5/8th wave is a great antenna misunderstanding example. Everywhere we look, everything tells us the 5/8th wave has 3dB gain. It is just broadly accepted, often without a moment's thought, that a 5/8th wave has 3 dB gain. Nobody questions gain over what reference and under what condition.

Let's look at why this occurs using image antennas.

The 5/8th Wave and Other Verticals 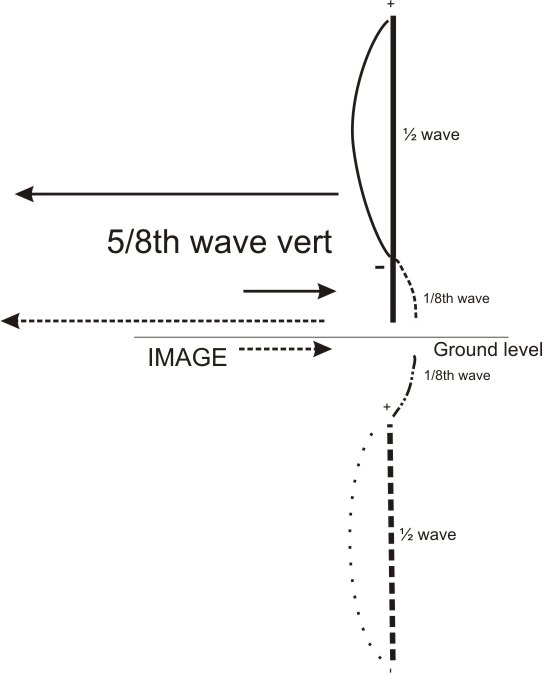 We often hear a groundplane only needs two or four radials to prevent feed line radiation. That isn't true. Years ago when I was designing a commercial antenna for lower VHF, I discovered significant SWR changes in a four-radial groundplane as I altered the feed line length. There was also significant pattern distortion.

Here is the freespace pattern of a 1/4 wl groundplane antenna with four radials without proper feed line decoupling:

The pattern distortion is caused by feed line common-mode current. If you think this is bad, imagine what happens with an end-fed antenna (even a 1/2 wave antenna) and NO radials! In that case all of the antenna current flows over the feed line shield! Many antenna designs actually use the feed line and mast radiation that others dismiss as "insignificant" to increase antenna gain.  In some cases, the antenna designers really don't even understand what they did to create a "magic" antenna.

Here is the same 1/4 wl groundplane, with radials and radial ground connection insulated from the mast, with a feedpoint "feed line choke" of moderately high impedance (3000 ohms):

In this case feed line currents are under .4 amperes, and antenna current increases to 3 amperes.

The pattern is much cleaner and more like what we expect from a groundplane far above earth. The antenna, even with a good isolator, still needs more work. The system needs a ground on the "unbalanced" side of the isolator (the station side) to be 100% effective. (This is why I also ground the unbalanced side of Yagi baluns to the antenna's boom. A coil of coax hanging in the air is probably not good enough without a shield ground on the station side of the balun.)

With a perfect balun and optimum de-coupling (a few extra radials below the balun or an extra-ordinary balun), the pattern looks like this:

This is the ideal pattern of a 1/4 wl groundplane. Despite what we might think, it takes extraordinary care to obtain an ideal pattern. We often assume we have this pattern, because we model antennas without  the feed line or mast included in the model!

To obtain this pattern, I had to:

Use a good balun just below the radial tip level

It is possible to accomplish this in the real world. All we need to do is insulate the radials from the mast or tower, use a feed line isolator, slope the radials downwards, and ground the shield to a reasonable RF ground on the station side of the isolation device.

If an antenna model does not include the feed line, losses in the feed line, or imperfections in the source it much more likely than not is a flawed model. The real-world antenna often will be much different if the model ignores the feed line and mast.