I've constructed RF power amplifiers since I started in amateur radio nearly 50 years ago, my first transmitters and receivers were all homebrew. My first actual designs were in a technical college electronics lab in the late 60's, where as a lab project associated with engineering courses I designed a grid driven neutralized 7094 PA stage.   The 7094 was quite a large tube for me back then, and it was interesting learning how to use information in data sheets to calculate and estimate component values.

Over the years, especially with the recent decline in vacuum tube quality, I've come to firmly believe the only place to connect the grid in a grounded grid amplifier is directly to ground!

The grid not only shields the input from direct RF feedback from the anode, it is also a good shield to prevent or minimize the anode voltage that might appear on the cathode during tube arcs. Floating the grid above ground is bad for RF, and bad for arc protection. 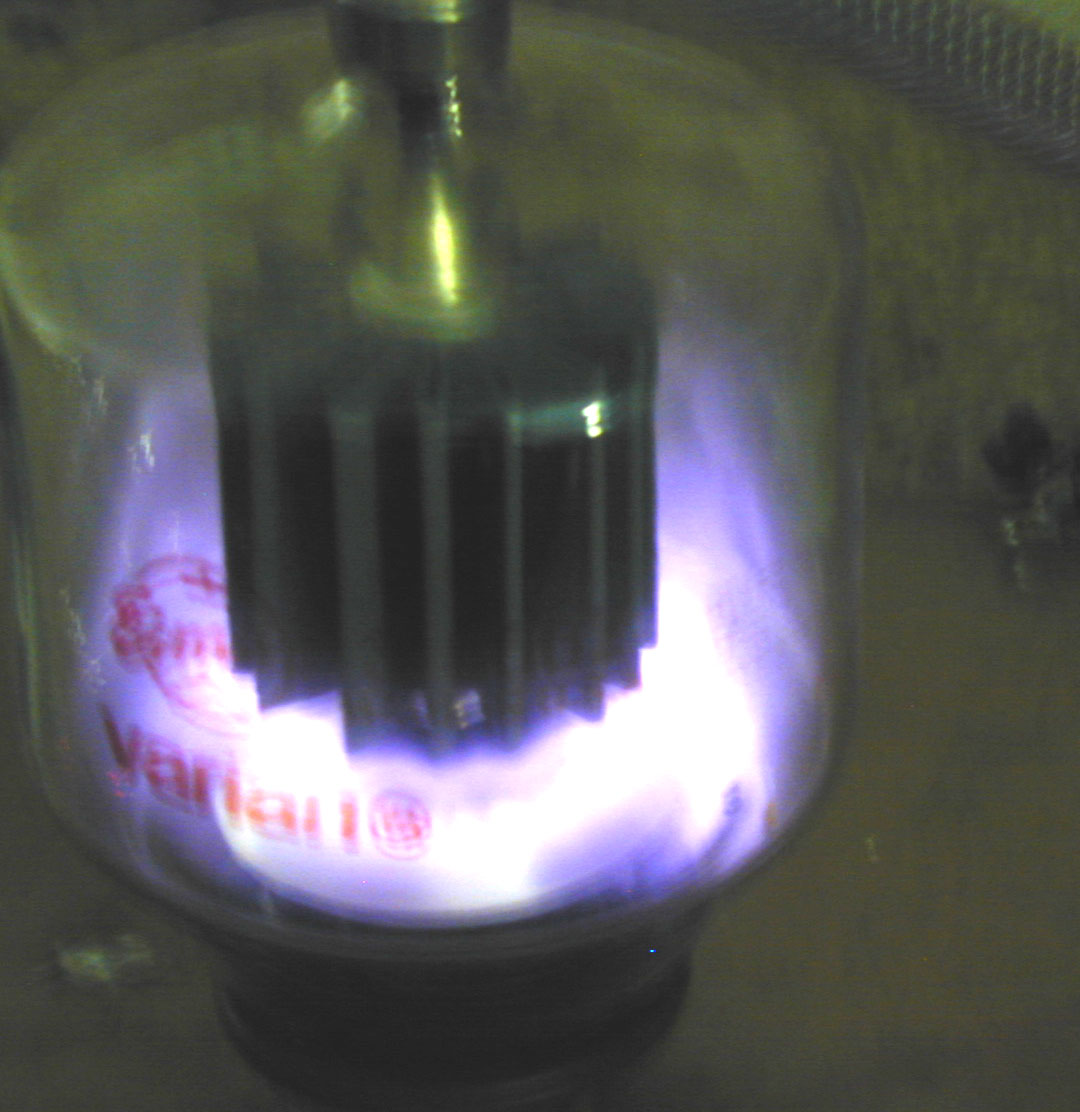 The only thing preventing full anode voltage from appearing on the cathode of the 3-500Z is the ground on the control grid.

The control grid ground is also the single most critical connection for stability. The grid connection to ground should always be as wide and short as possible, and use as many pins as possible.

One indication of a good design and/or knowledgeable designer is how well the grid is grounded.

An amplifier with the input applied between the cathode and grid and the output between the anode and grid is called a grounded-grid amplifier. This is true even when the amplifier does not have a directly grounded grid.

The grid RF reference point, which is the chassis ground, is the common reference for both input and output power.

The input and output circuit of a grounded grid amplifier are connected in series through the tube. Plate current is common through both cathode and anode, and only dc plate voltage is not.

Back when we measured power as plate input power and not RF output power, the FCC even had a rule similar to this. The FCC wanted driver plate input power to be included as a full part of power amplifier plate input power. Thus kilowatt grounded-grid amplifiers, like the Heathkit SB220, when driven by 100-watt exciters could only run 900 watts input if the operator wished to comply with FCC rules.

Probably based more on FCC conservatism than actual operation, a few widely accepted handbooks and authorities claim driver power adds to output power via feedthrough and is not accounted for in the metering system. Thinking unclearly, these books propose full driver power be deducted from output power when calculating efficiency.

In actual operation, all extra current contributed by the exciter is fully accounted for in the plate current metering. The only thing not accounted for is a portion of the average cathode-to-grid voltage, which directly adds to the anode-cathode voltage during negative cathode swings. During positive cathode voltage excursions the gird is more negative compared to the cathode, so the tube cuts off. Since the tube is just "coasting",  the positive cathode swing does not detract from effective operating anode voltage. This asymmetrical tube conduction causes the RF voltage between cathode and grid to contribute to amplifier output by adding effective anode-to-cathode voltage without the additional voltage showing on meters.

If we look at this circuit we can see what that happens, because the anode and cathode are indeed in series! As in all series circuits, current is the same at all points in a mesh or loop. We only have to insert an anode current meter in the anode or in the negative rail of the HV supply to measure the full effect of drive power on plate input power. The metering shortfall is confined to measuring effective anode-to-cathode voltage, since the meter connects from HV to ground (to the grid, not to the cathode). The meter also cannot read the time-varying cathode voltage accurately because it is the wrong type of meter (it can't read average voltage) and it is connected across the wrong two points.

HV is read from grid to anode, while the signal source is in series with the HV supply, adding grid-cathode RF voltage to effective high voltage on negative swings of the cathode. Since the tube conducts heavily during negative cathode swings, that is also when the extra voltage provides the largest contribution to output power.

Gain of a Grounded Grid Amplifier

The larger the ratio of Zin to Zout and the higher the mu, the greater the stage gain. This means two things influence gain of a grounded grid stage:

Thus we understand why high µ tubes, especially when the tube also operates with high anode voltages (to create a high anode impedance), have low input impedances and high gain. The 3CX800A7 would fit this category and is a fairly high gain tube with relatively modest anode voltages.  The 3CX1200 series and electrically similar 3-1000Z are lower gain tubes, even when operating at more than twice the anode voltage of a 3CX800. The 4-1000A is an especially low gain grounded grid tube for a given anode voltage, because it has low µ and that causes a high cathode drive impedance.

The YC-156 3CPX5000A7 has a particularly low cathode drive impedance, and thus has very high gain in grounded grid at high anode voltages.

Cathode voltage swing depends on the grid to cathode voltage required to move the tube through the conduction desired or required.

Let's assume we have a tube operating in AB1 with a grid-to-cathode bias voltage of -50 volts. As long as the grid voltage is not very much positive with respect to the cathode, the grid-cathode path will not show grid current. Sine we know the negative grid to cathode voltage is 50 volts, we know the negative cathode swing cannot exceed around 50 volts on peaks. Otherwise the control grid will start looking positive with respect to the cathode.

This means the cathode could not have much more than 50 volts negative on peaks. With a sine wave, this is 100 volts peak-to-peak voltage at the cathode.

This would take the grid right up to the point of zero current, where any additional voltage would cause grid current (because the grid would go positive).

In this schematic, the AC source couples through C1 and superimposes AC voltage across L1. This makes the end-to-end voltage of L1 swing between -50 and +50 volts.

When the drive (source) voltage swings negative, A is negative with respect to B. This is now like two batteries in series, the voltage across L1 and the voltage across Eb, but opposing each other. At the driver positive sine wave crest, these voltages subtract to zero volts. This is not enough to cause grid current (grid does not go positive with respect to cathode) but it does cause very high plate current.

All plate (and screen) current flows through L1 in the cathode system. If we have an effective RMS time-varying signal anode current of 1 ampere,  the generator (source) would have to force 1 amp of RMS current to counter act that current. This is the current varying throughout the RF cycle, not the steady or average indicated dc plate current. If you pay attention to polarities, you will probably be able to see how this works. The anode path RF current is out-of-phase with what grid excitation requires to create that RF anode current. Since the control grid draws no current, we are left only with the out-of-phase anode current and a negligible amount of screen current.  This system requires around 35 volts RMS into the cathode to swing the grid-cathode voltage to the edge of grid current (AB2). Thus we would have about 35 volts at 1 amp RMS, or 35 ohms driving impedance. Driving impedance in this case would be 35 ohms, which is 1 amp RMS, 35 volts RMS, and of course 35 watts average power.

From this you can see how the grid bias point necessary for proper bias ties into gain and drive power. If the tube required 100 volts or so bias in AB1, and had the same anode effective RMS current, drive power would double. We would need 70.7 volts RMS drive voltage, instead of 35 volts, at the same 1 ampere RMS.

The RMS voltage into the tank would be the effective one ampere RMS signal current times anode impedance presented to the anode by the tank system and load. Let's assume that impedance presented to the anode is 3000 ohms. From this, we can see load power is 3000 watts. It also follows gain is 3dB less if anode current is the same and we double bias, because we have twice the required grid voltage (cathode voltage swing) for the same anode current when the tube requires double bias voltage. I've neglected minor things like screen current and amplification factor to make this simple.

From this we can seen why gain of any cathode driven amplifier varies greatly with the ratio of anode load impedance and cathode driving impedance.

As an interesting side note, this is why the gain of most cathode-driven tetrode amplifiers does not change greatly with or without use screen and grid bias voltages. I learned this lesson when I had a pair of 4-1000A tubes cathode driven. They were difficult to drive to full output because cathode voltage swing required to move the tubes through the normal operating load line was so great. In grounded grid without screen voltage, the driving impedance per tube was just over 100 ohms.

In an attempt to improve linearity and reduce drive power requirements, I built a screen and bias supply. These tubes required about 130 volts of control grid bias when screen voltage was applied. After designing and constructing a very good bias and screen supply, vacuum tube regulated with 6146 regulator tubes, drive requirements barely changed. Of course IMD products were reduced greatly because the tubes had much better ratios of screen to control grid current (control grid current went to zero mA).

The only way to increase gain was to move the high voltage up over 6000 volts, which of course would increase anode impedance for the same RF power level.

Grounded grid tetrodes are much cleaner than grid driven tetrodes. This he negative feedback in the anode current flowing through the input system. This is also why we want a tuned input right at the cathode, not three feet or 15 feet away like many assume is OK. A tuned input a long distance away can look good for SWR and drive power, but it can increase IMD and can put a big bite on efficiency. People who never measure anything but SWR will pipe up and say "I use an external tuner and it works fine" or they don't use a tuned input at all, because they only measure SWR.

When we don't measure or attempt to observe problems, we assume there are no problems.

Metering of a Grounded Grid Amplifier